While swapping an engine for vehicles, there are certain problems people use to face every time. Therefore we have compiled some useful methods to avoid pitfalls while custom engine swapping.

Below is the list of ten useful methods every builder must acknowledge before custom  crate engine swap. 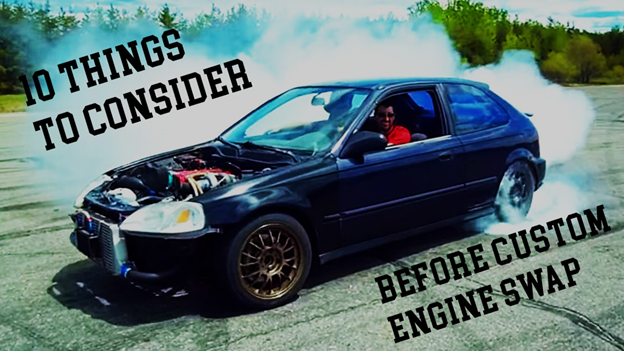 Not every car needs an engine swap, but no one knows if someone wants a little change. But swapping a lightweight engine with heavy one is a big trouble. While selecting something lightweight will make any engine swap more easy and make it more intense to whole power -weight ratio. For lightweight chassis, try to find something older with fewer airbags. Moreover, not every engine swap makes sense.

Traditional fan system was considered to be OKAY with old engines but modern engines get hotter instantaneously and it requires enough cold temperature to uphold their functionality. It has been noticed that many people underestimate the power of the cooling system in a modern engine swap. While having a new engine swap one must install a mechanical fan rather than low priced electrical fans that require instant changes every time and doesn’t go with flow.

Many times pre-build factory radiator works great, but it gets difficult with big engines under limited space. You can place an electric fan on the opposite side of radiator. But make sure the fan’s polarity is reversed, so the air keep passing through the radiator, whether it get pulled or pushed.

Wiring is always a perpetual problem for builders. Besides what project size they are taking on, it makes custom swap engine Challenging. Wiring is the main issue in engine swapping as it can become complex and takes a lot of time to get an idea about the actual power of electric current to provide and electric delays.

Most people commit a mistake of two basic wires for power and ground, While the best practice says that a circuit must have individual cooling system and system with at least two relays.

Instead of upgrading new suspension and steering systems into your vehicle while having a Steering linkage problem, It is mostly done by the wide variety of aftermarket components available in shops; sometimes the combination of parts used can require an odd combination to avoid steering linkage.

Oil pan clearance is also one of the biggest troubles. The best practice is to have a pre-made custom oil pan and pick-up tubes to avoid headaches.

Although late-model engines have mounting brackets for cooling compressions, as they are located on the lower section of the engine, while frame rails are in between and this could be a problem to locate engine exactly. So it’s better to mount your compression to a different location.

The driveshaft is often overlooked but yet important part of a vehicle drivetrain. It must be strong and work properly while constantly changing the angles. Most people often run into the problem of measuring driveshaft or selecting right yoke. In order to select a driveshaft, it must be correct in length with proper yoke engagement amount with transmission output shaft. It also is in U-joint size and in proper style. These basic measurements can build the best driveshaft for your vehicles.

While setting cooling systems, most people lack in having proper reservoirs. It is very important to change reservoirs every time. So with the cooling functionality, sometimes packaging gets tight and the remote reservoir is needed.

While needing a large and high-quality fuel lines and better filtration, most people run into the problem of selecting right fuel pumps for their vehicle. It is mostly recommended to use a factory-style pump. While frame-mounted and high volume pumps vibrate and run very hot that cause failure and noise in the cabin which causes a problem.

Sometimes it’s gets tricky while converting flywheel pattern with transmission spline count, to avoid this issue there are aftermarket “hybrid” converters available, which are very useful and give the best solution to this problem.

Another major problem while having an engine swap is customizing intake and exhaust system. Intake pipes can vary in terms of manufacturing but the best practice is to start with a pipe which that matches best to your engine. The exhaust is slightly different. Here, the engine’s exhaust manifold(s) probably isn’t going to bolt up to whatever exhaust system is underneath. An adapter pipe is needed here with a flange on one end which fits up to the manifold and on the other end it combines with the exhaust pipe.

Engine swapping has become latest glam for vehicle builders but its emission-legal varies from state to state and its usage depends on local laws of that country or state. Most car builder’s love to make amendments into their car for fun purposes. But it is also necessary that new engine must meet requirements to relevant car. Some people spend money on equipment that change nothing into the car except great looks. In some states of US engine swapping considers as illegal it took special permission from motor authorities to swap engines. Also, if you are living in California, the donor must be as new as whatever chassis it’s going into, now this can restrict engine selection.

Most of the issues in above list can be resolved by extensive research and time. Swapping your engine for the first time? One shouldn’t be afraid of any risk or changes: For best output go for experts. You can contact Td Motion for expert advice.