If you are a licensed car owner, you would know the importance of a properly functioning clutch and exhaust system amongst other similarly crucial car parts. Hence, maintaining these two auto parts in top-notch condition is always vital to the safety of both the driver as well as the passengers riding in your vehicle. However, since these constitute the interior hardware of a vehicle, it is often difficult to determine if it has sustained any damage due to overuse or post-crash, unlike the car parts that easily visible to the naked eye and form the outer shell of a vehicle. This is because while a car owner is always careful to maintained his/her image in front of others by keeping the car doors, hood and tailgate free from dents and scratches, he/she might often forget to get the inner machinery of the car checked at regular intervals.

Such carelessness can end up costing big when the car breaks down in the middle of a ride due to faulty exhaust system or clutch. Both of these car parts are required to function smoothly for the vehicle to run properly without any hiccups. 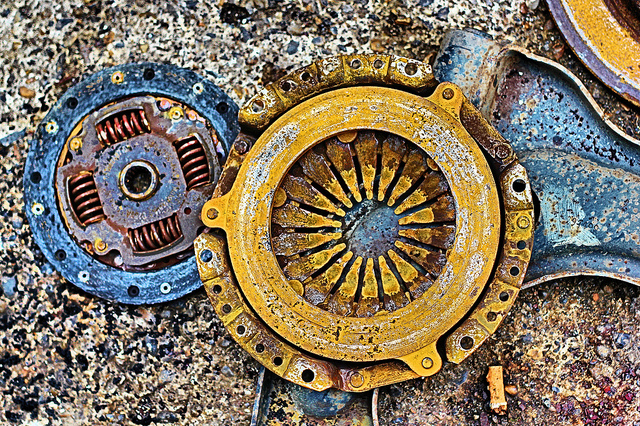 While the flywheel, clutch disc and gearbox are some of the major parts that a clutch is made up of, there are also other car parts such as rough ceramic surfaces between the clutch disc and flywheel, to ensure proper grip is maintained when these two parts come in close proximity to each other; a hollow pressure plate placed on top of the clutch disc that assists in the smooth engaging and disengaging when the gear changes.

The function that a clutch serves may remain the same in all types of vehicles, but the structure and hardware of the clutch may vary depending on whether the transmission of the car is manual or automatic. In automatic transmission vehicles, as opposed to the manual transmission vehicles, there is a torque converter which works as a clutch instead. The torque converter is made up of auto parts such as impeller, stator and turbine and helps in regulating the amount of torque applied on the engine.

If you are looking for the perfect place to buy the components of a clutch, look no further than Parts Avatar Car-Parts. Some of the aftermarket auto parts that are available here are:

Exhaust System Of A Car

The engine of the car creates combustion, which gives rise to exhaust gases, which are pushed out of the car via exhaust pipes. These pipes are connected to an inbuilt exhaust system that works tirelessly to make the car exhaust gas-free every time the engine turns on. The exhaust system of a vehicle, keeps the car cool from inside, which otherwise would be filled by toxic gases and heat up faster than barbeque joint. Some of the main components of an exhaust system are exhaust manifold, catalytic converter, resonator, muffler and tail pipe. All of these components have their own individual functions and yet they operate in harmony to ensure that the car exhaust gases are dispensed properly.

The initiation of the process is done by the exhaust valve that captures all the toxic gases that is caused as a result of the combustion of the car engine. There are some gases which are extremely harmful for the environment if released in their raw form, such as the CO and nitrous oxides. Hence, these gases have to be partially neutralized first before they can be let outside the vehicle. The job of making the toxic gases as safe as possible is done by the catalytic converter in the exhaust system, which is made of ceramic and platinum or palladium layers. In the next step, the partially neutralized gases travel into the hollow muffler chambers that work to negate all the unnecessary noises that accompany the gases all the way from the engine. These chambers vary in sizes and angles at which they are placed. The odd placement and shape of the chambers acts in preventing the car from making noise pollution.

Some car owners prefer their cars to be custom-built and hence have the option of installing a special muffler resonator which are intentionally built to let some of the specific notes to escape along with the exhaust gases, in order to bestow a certain “character” to their vehicles. This practice is common among supercar and sports car owners, who love the sound of their vehicles “vrooming” away on the highway or racecourse.

Regardless of whether you desire to build a new exhaust system from the scratch or are simply looking to replace certain components of it, one short visit to Parts Avatar Canada can solve your needs. Some of the components of an exhaust system that you can find here are: